“I will treasure this forever,” said nine-year-old Simon, as he clutched his new Faith Alive Bible. Simon lives in the remote village of Cormorant in Manitoba, Canada. He and his friends, along with the other children in this isolated community, wait anxiously for the return of a VBS youth mission team who arrive every summer from Peace Lutheran Church in Columbus, Nebraska. For eleven years, this team of ten to twelve high school youth and a handful of adults has worked with LAMP-Canada to bring the saving love of Jesus Christ to the children in Cormorant.

Over the course of one week in late July, more than eighty children and teens learned about Jesus, as the VBS team led interactive Bible story dramas and puppet shows and as they painted, colored, gave piggyback rides, laughed alongside, and shared time and love with these precious children.

In 2014 and again this year, the Columbus, Nebraska, mission team has partnered with Concordia Gospel Outreach. Through CGO, the team has given Arch Books to all the children, sharing the same Bible stories learned in VBS in these take-home treasures, providing an invaluable resource for continued learning opportunities. They’ve also provided Bible story books and Faith Alive Bibles for the older children, as well as other materials. 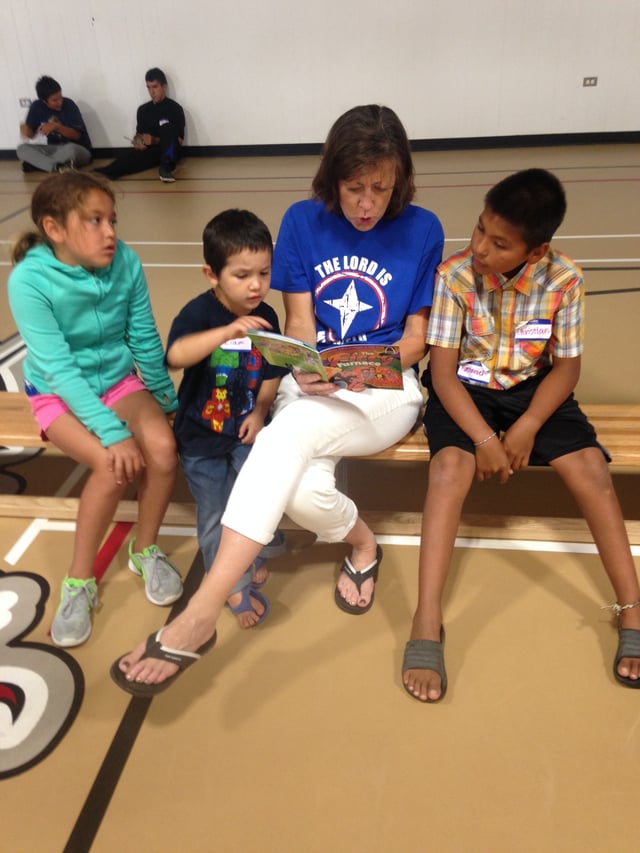 Deb Burma reads an Arch Book to children in Cormorant.

This year, the mission team witnessed a taste of the Holy Spirit’s rich fruit that’s been produced in the children who eagerly received books and Bibles two years ago, thanks to the provision of resources through Concordia Gospel Outreach. Simon, then age 7, received One Hundred Bible Stories, and he proudly brought it with him to VBS every day this year. Several times, he excitedly shared with the mission team and with other children the truths he has learned from it in the past two years! Stacey Holt, director of Christian education at Peace, and Deb Burma, a youth leader at Peace, asked Simon to talk a little more about his precious Bible story book.

Simon talks about his precious book.

The VBS team was humbled and awed to see the Holy Spirit’s continued work through God's Word, laid in the hands of the children of Cormorant again this year. As Simon read to others from his One Hundred Bible Stories book, he kept exclaiming that someday he hoped to have all of God’s Word to read. Unbeknownst to Simon, that “someday” happened a few days later when he received a copy of the Faith Alive Bible.

God be praised for His mighty work through His people in the mission field and through those who offer their support from home through Concordia Gospel Outreach. The message of Christ and His saving love continues to go out!

Mission Trip US and Canada

<< Conversations That Matter: Supporting New Parents with the Gospel
From Nostalgia to Normalcy: 8 Post-Mission Trip Essentials >>

Deb is an author, speaker, and youth ministry volunteer at Peace Lutheran Church in Columbus, Nebraska, where her husband, Cory, serves as pastor.