Trusting the Holy Spirit when Sharing Your Faith

I was extremely upset. I had been redirected home from a summer job after my first year of college. I was upset that I had not been able to do what I had set out to do—it was a job I had been praying about for months and months. I was angry and questioning why God would do this. Why would He make me prep for months, bring me out there for a week, only to send me back? For weeks, these questions covered my thoughts as I worked tirelessly at the summer job I’d had since mid-high school. I worked as much as I could, babysitting on the side to try and make up for the lost time on the job.

Then came a rainy day. It was cold and slow at work. There wasn’t much to do but talk. My co-worker that day was a friend from high school; we hadn’t run in many of the same circles, but we got along great. You see, my co-worker was a Muslim, and she knew I was a Christian. We would laugh that we were the beginning of a joke. A Muslim and a Christian work together in a gift shop… But something felt different about this night. I couldn’t put my finger on what it was, but I felt nudged, knowing the opportunity to have a spiritual conversation was there. 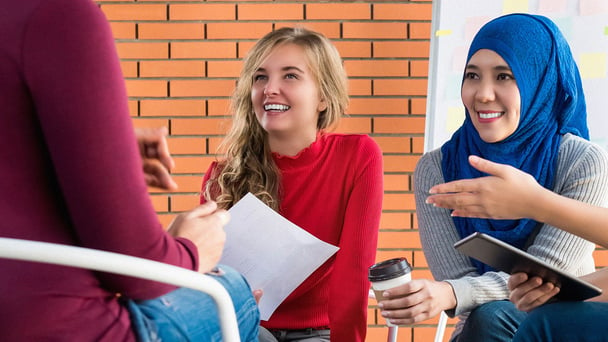 “So, like, do you think that people look down on you because you believe in a religion?” She spoke before I could ask her the very same thing.

I quickly gathered my thoughts and launched into an answer. My stomach turned. I had no idea where this conversation was going and I knew it was important. I felt unequipped; I was still a “baby” Christian, and this conversation hadn’t started on my own terms. She spoke about how she felt that people thought she was dumb to have faith, how she felt like people thought they were superior for being atheistic or agnostic. We focused on that similarity in our experience. And then, a simpler sentence made me stop in my tracks.

“So… what do you believe about Jesus?”

I could have cried. I was nervous; I didn’t know how to explain Jesus to someone who already had a different faith and strong beliefs about Him. But I didn’t have time to prepare, so I spoke what I knew and said, “I’ll have to look into that more,” when I didn’t know the answer. I spoke from Scripture and pointed to Him.

That night when I got home, I prayed. Well, first I cried, but then I praised God. You see, it wasn’t and it isn’t my job to change her heart. But the Spirit guided me to plant a seed, and I pray that it has been growing.

Interfaith conversations can turn tense or uncomfortable, or you may get a question that you have no idea how to answer. I had to remind myself during this conversation that I could not screw up God’s plan. I still had to carefully think about my response to make sure that I answered in a way that would keep the conversation going and was respectful but still centered on Jesus. And the Spirit was with me.

Our helper during these spiritual conversations is the Holy Spirit. It’s easy to forget in these moments that He is guiding them.

Adele Werner is a seminarian’s wife, mother, a third-generation Yooper, and content marketing specialist for Concordia Publishing House. Devoted to Jesus, she has a passion for serving others and sharing the Gospel. She is an alumna of the University of Michigan, where she majored in media and communication studies, minored in writing, and served in multiple ministries. As an avid consumer and creator of all content, she can often be found watching movies categorized as “Oscar-bait,” listening to podcasts, or reading a good book.